Why Jollibee Is Much More Than a Filipino McDonald's

Serving combos like fried chicken and spaghetti, the family-run franchise taps into a deep sense of comfort for many Filipinos.
Jian DeLeon
Image via First We Feast Original

It’s been decades since I’ve visited the Philippines, and while I’ve been itching to make a trip back to the country where I was born, I am but one of millions of Filipinos that has to make do with vague connections the motherland. Roughly 10% of the Philippines' 98 million population are overseas workers. About a million a year leave the country to find their fortunes elsewhere. According to a website dedicated to helping OFWs (overseas Filipino workers) find jobs, 4,800 Filipinos found work abroad in 2014, compared to 2,800 who found work in the Philippines.

The majority of OFWs (33%) are laborers, working humble blue-collar jobs in order to provide for their families. There are a myriad of ways to reconnect to your homeland, whether it’s subscribing to premium cable networks like The Filipino Channel, or listening to OPM (Original Pilipino Music)—two of my favorites are Eraserheads and Rivermaya. But the most accessible, and often most affordable option, is food. When I’m unable to visit my family in Northern Virginia and enjoy tilapia or adobo, I’m fortunate that I’m able to dine at spots like Maharlika, Manila Social Club, or Ugly Kitchen—all of which offer modern spins on Philippine cuisine.

But sometimes, I just really want Jollibee. For me, it’s tied to the first birthday I can ever remember having. For others like Alvin Cailan, founder of Los Angeles’ cult breakfast stand, Eggslut, it’s a surefire way to fight a post-happy hour hangover. "There's nothing I crave more than spicy chicken joy after a night of drinking,” he says.

The Filipino fast-food chain is commonly referred to as the country’s answer to McDonald’s, despite predating the Philippine presence of the golden arches by six years. It started in 1975, when Tony Tan Cakitong made the fateful decision to add hot dogs to the menu of his Magnolia Ice Cream parlor. But to understand the peculiar flavor profile of Philippine cuisine, and therefore Jollibee, you need to take into account the country’s geography and geopolitical history. As a famed port-of-trade and a tropical country just twelve degrees from the equator, much of its food has historically relied on different preservation methods to keep ingredients from spoiling—mainly vinegar, salt, and sugar. So plenty of the food tends to skew between those three main tastes, or some combination of two or three.

My personal favorite item at Jollibee—the N2 plate with a chicken drumstick and Filipino-style spaghetti—balances these flavors with a sugary tomato sauce, a generous sprinkling of cheese, and the extreme savoriness of chopped up hot dogs and the fried chicken. It smells amazing before it even hits your mouth, reminding me of an outdated Jollibee slogan that I remember seeing on billboards and in television commercials the last time I was in the Philippines: “Atin ang langhap-sarap,” which roughly translates to “ours is deliciousness, inhaled.” But at the heart of it, it ties the senses of smell and taste together, promising that the aroma is as good as the food itself.

Jollibee’s fried chicken captures the Philippine palate perfectly: extremely salty with a slight hint of sweet and sour, and the spicy version provides a palpable kick. It’s also worth noting that they serve plenty of dishes with a side of rice, as well as more common fast-food fare like burgers and hot dogs. It’s a testament to Filipinos’ ability to code-switch between cuisines, something we likely learned by adapting to the various cultures and nationalities that have passed through our country, in addition to being a former colony of Spain and then the United States.

But Jollibee is more than just a Filipino restaurant. It’s a symbol of the Philippines itself—delightfully cheesy but totally earnest in its beliefs. We are a karaoke-loving people who embrace all things mawkishly sentimental. We make McDonald’s commercials featuring grandfathers with Alzheimer’s that I can’t even watch the first ten seconds of without tearing up. And I’m not alone in equating Jollibee with homesick feelings for a birthplace I never got to properly know.

"The reason it’s so relevant is that it’s the only thing people have that they had in the Philippines," posits Björn DelaCruz, chef and founder of Manila Social Club. "It’s a place where Filipinos can go to remember the country."

Just last week, DelaCruz went to the Jollibee in Queens, which opened in 2009 and was described by the New York Times as a "Filipino addiction." He says the quality of the food has always been great, but thinks the best part of the ambiance is the evident passion of the people who work there.

“They understand that they are representing the Philippines, because there are people coming there that aren’t Filipino,” he adds. That doesn’t just ring true in Woodside, but also several of the West Coast locations he’s been to.

Cailan appreciates the Tagalog honorifics he’s often greeted with by the staff. “The iconic Jollibee was more of a glimpse of life in the Philippines, when you're greeted with the ‘mam-sir’ or the ‘po and opo,’ it made me feel like I was in Manila even though I was on the corner of Vermont and Beverly.”

The chain’s Palabok Fiesta—a dish of thick bihon noodles bathed in a reddish brown shrimp-flavored sauce and topped with shrimps, pork, egg slices, and crushed pork rinds—may not be the home-made sort Filipinos eat during family potlucks, but it encapsulates the essence of the dish in a way that still feels authentic.

“Filipino food is far too complex to commercialize,” explains Meg Cuna, Style Director at POPSUGAR. “What Jollibee does well is offer a tasting menu of Filipino food packaged in the way Westerners typically love to have their exotic foods: neatly categorized. It reminds me of family party buffet staples.”

Jollibee made its first foray into America’s flyover states earlier this month with a location in Skokie, Illinois. Solely judging from the number of Filipinos in the hours-long wait line, you’d almost be forgiven for thinking these people were waiting for a Kanye West sneaker drop or the latest collection from Supreme. Both of those are things plenty of Pinoys enjoy camping out for, but really it reinforces the special sentimentality that Jollibee holds in our hearts. One customer reportedly drove seven hours from Minnesota for the chance to enjoy a Yum Burger and a Halo-Halo, the Filipino shaved ice dessert that contains layers of ube-flavored ice cream, leche flan, condensed milk, and various jellied fruits.

Even if it isn’t a straight-up recreation of the homemade Filipino food that often serves as outsiders’ first introduction to the cuisine, there’s still a certain sense of realness. Maybe it’s that Jollibee remains a family business. Tony Tan Cakitong remains the company’s chairman. And despite its ownership of other chains like Greenwich Pizza, Chowking, Red Ribbon, and Mang Inasal, Jollibee only has 900 stores—compared to McDonald’s nearly 40,000 outlets. In fact, the company’s commitment to catering to the Filipino palate helped it withstand the American chain’s entry into the Philippines in 1981.

As a child who grew up in an extremely budget-conscious household, fast-food was one of the luxuries my family could manage to squeeze in, and the multitude of working-class Filipino families can probably attest to that. For the millions of Filipinos abroad, what Jollibee offers a nostalgic taste of home at a price most of us can swallow. 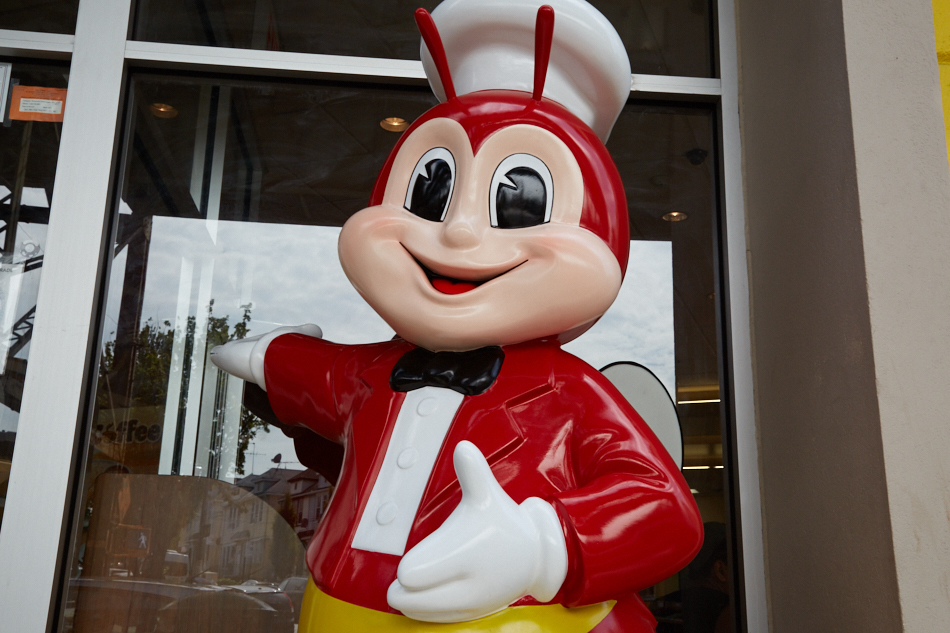